NBI is already considered beneficial for detecting early-stage gastroenterological cancer and is an established and widespread method of screening. More recently, in the field of urology, the benefit of NBI for bladder cancer screening is being proposed. This presentation is based on an interview with Associate Professor Katsunori Tatsugami, who has presented his findings and has written a clinical paper on diagnosing bladder cancer using NBI.
We hope this presentation will help more professionals understand the procedure and the efficacy of using NBI for urological patients.

NBI Use at Kyushu University

NBI provides higher sensitivity than WLI (Table)3) for detecting bladder tumors and is said to be beneficial for carcinoma in situ (CIS) diagnosis. However, highly inflammatory lesions also appear abnormal, even though no tumor may be found. Because NBI provides a high negative predictive value (NPV) and low negative likelihood ratio (NLR), it is considered valuable for excluding a diagnosis of a bladder tumor, including CIS, especially during bladder cancer screening when urinary cytology results are negative. At our hospital we use NBI whenever possible for outpatients and those requiring post-TURBT follow-up with a cystoscopic evaluation.
NBI during cystoscopy can be achieved by simply pushing a button on the camera head or light source to switch from WLI to NBI. Hence, invasiveness for the patient is the same as that experienced with cystoscopy performed under WLI. After switching to NBI, the whole bladder must be evaluated again. For experienced surgeons, the extra time needed for NBI may be only 1-2 min. If NBI use is incorporated into routine cystoscopic inspection during a bladder tumor diagnosis, it will not be a stressful process.
I am often asked: “What does an abnormal lesion look like under NBI?” I believe, however, that it is more important to recognize normal tissue under NBI in our daily practice. Then, when an abnormal lesion appears under NBI, one can distinguish a tumor from an inflammatory lesion.

During TURBT, you may find the margins of the tumor more clearly depicted using NBI than with WLI. As this increased clarity helps to resect the tumor as completely as possible, without leaving residual tissue, I believe NBI assists in performing an adequate TURBT.
At our hospital, it is mandatory to perform NBI during TURBT to confirm the demarcation line between the tumor and surrounding tissue, which is more accurate than with WLI. When undertaking TURBT to remove a bladder tumor, we confirm the abnormal lesion by WLI first and then change to NBI to re-confirm it, as we do with the cystoscopic inspection. In this instance, however, we mark the area required for resection by coagulating the area with a loop electrode under NBI observation.
When using NBI observation, however, bleeding from the resected area may result in a poor view of the field. When this occurs, we revert to WLI after the marking is completed and start the TURBT. After the surgery and the bleeding has stopped, we change back to NBI for a final inspection of the whole bladder to confirm that we left no residual tumor tissue. 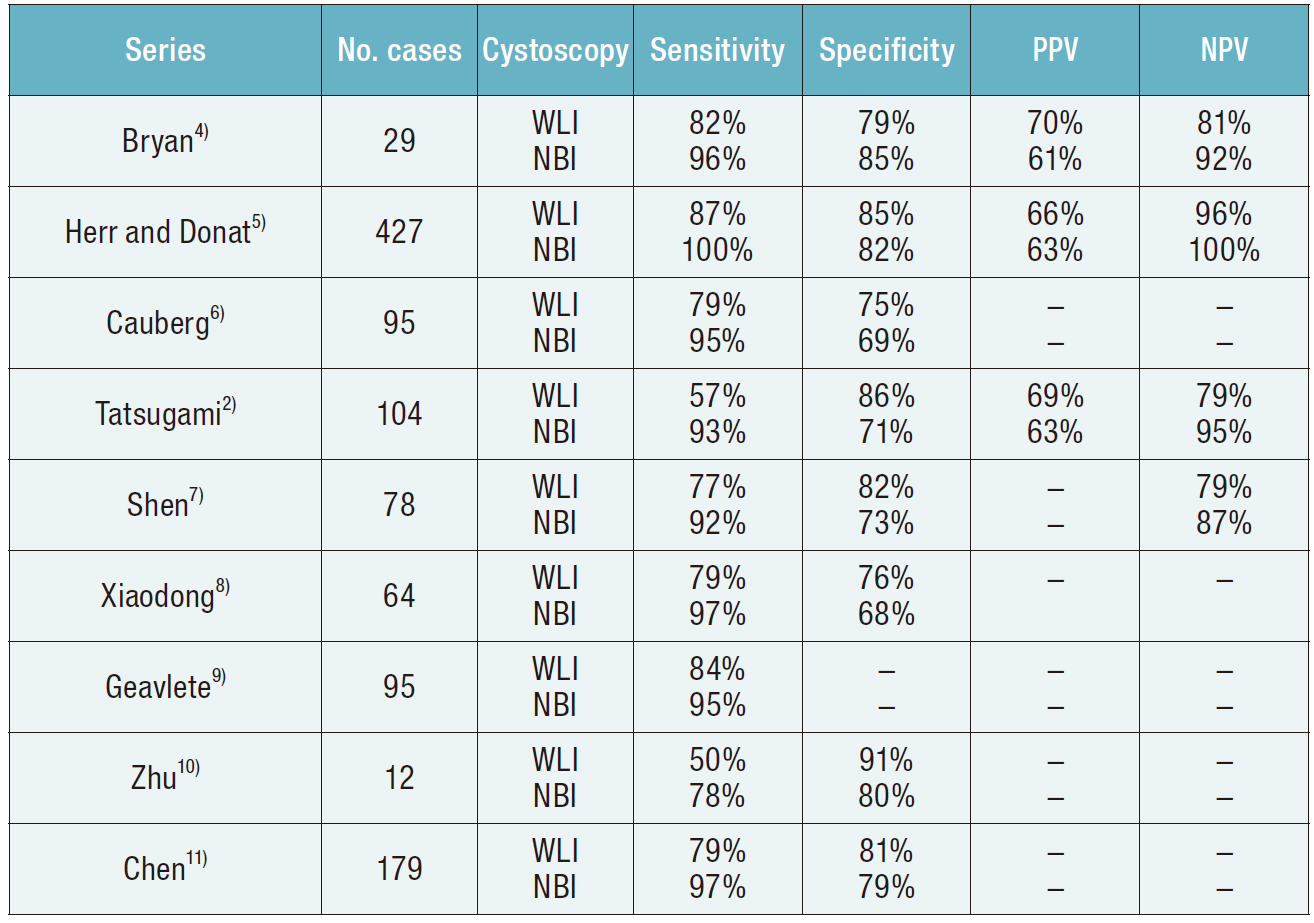 NBI requires a video processor/light source with NBI function (Fig. 1) and a flexible cystoscope (Fig. 2) or camera head (Fig. 3) that are compatible with the NBI system.
NBI function is already standardized in the Olympus HD imaging platform. Therefore, if the system is available, it is highly recommended to use to proactively conduct NBI observation in addition to conventional WLI cystoscopy. 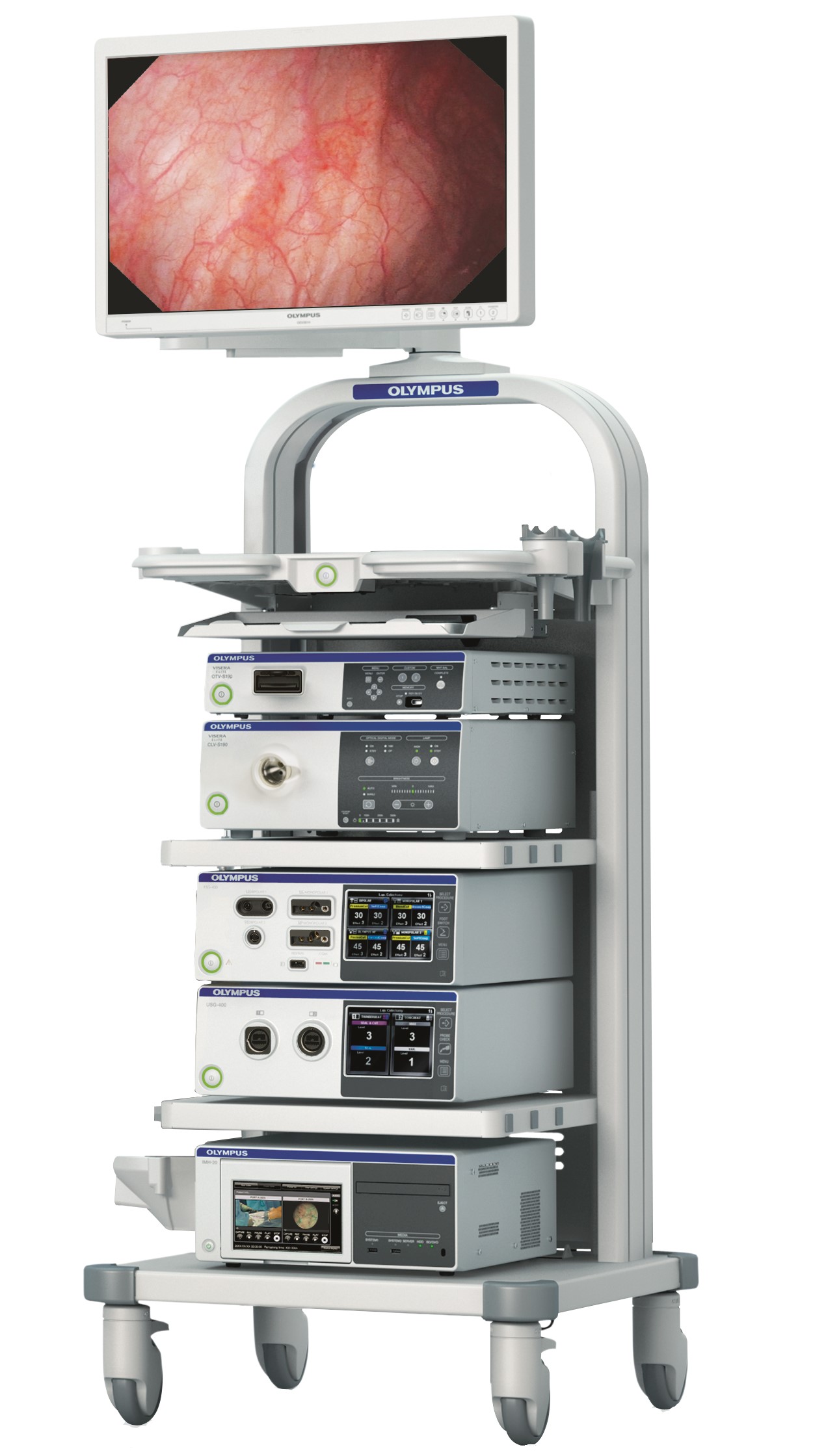 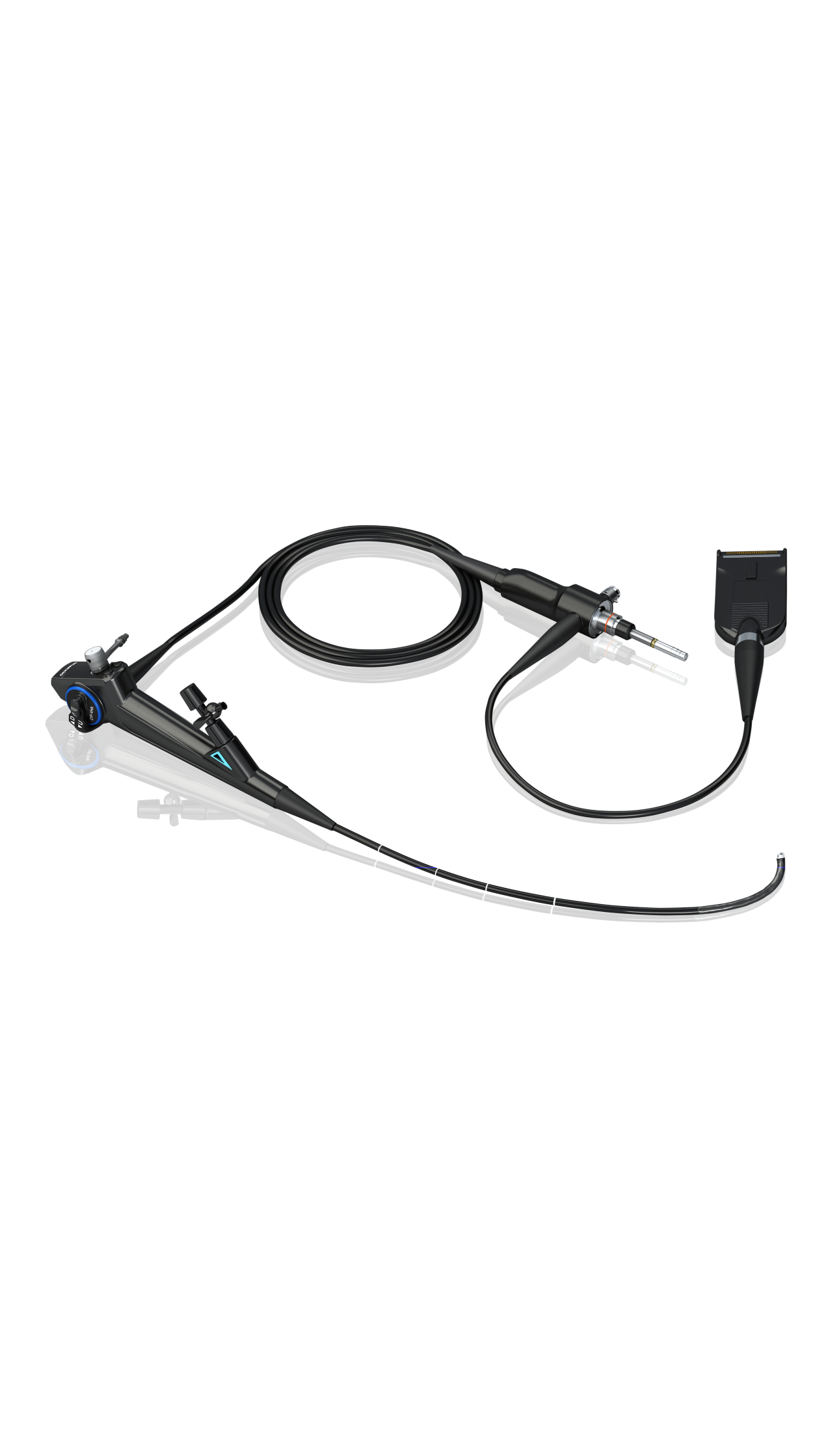 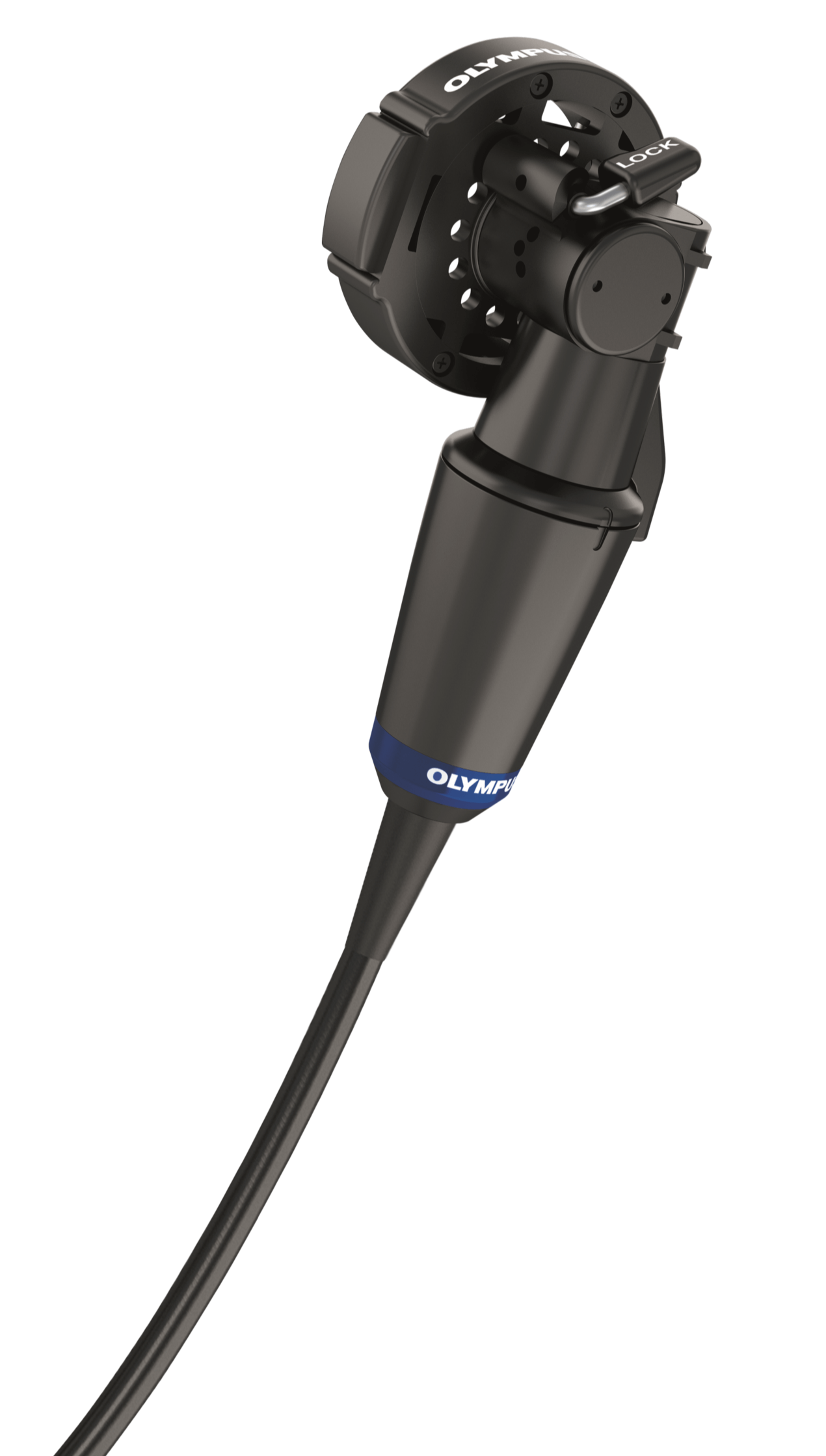 NBI makes it easier to identify a subtle abnormal lesion that may be difficult to identify with WLI. Superficial carcinoma is seen as brown or blue areas. Even abnormal lesions that tend to be overlooked under WLI can be seen clearly with NBI. Some abnormal lesions are identified only by NBI and later confirmed to be tumors after pathological examination(Fig. 4). 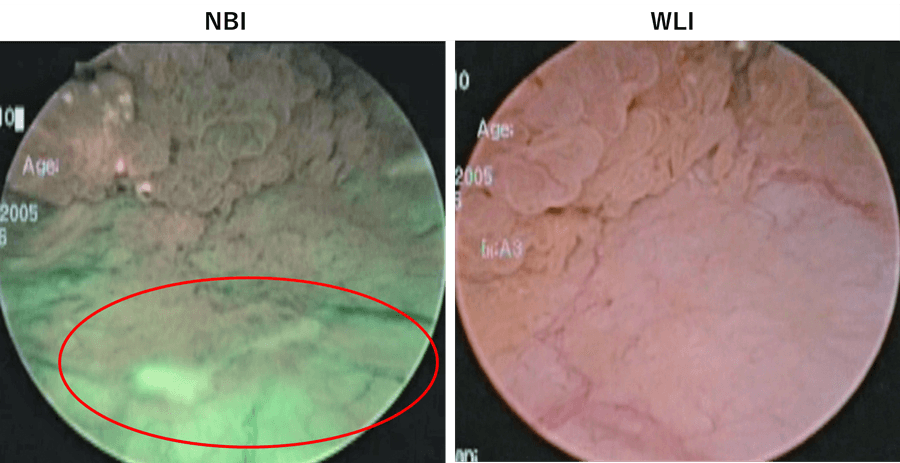 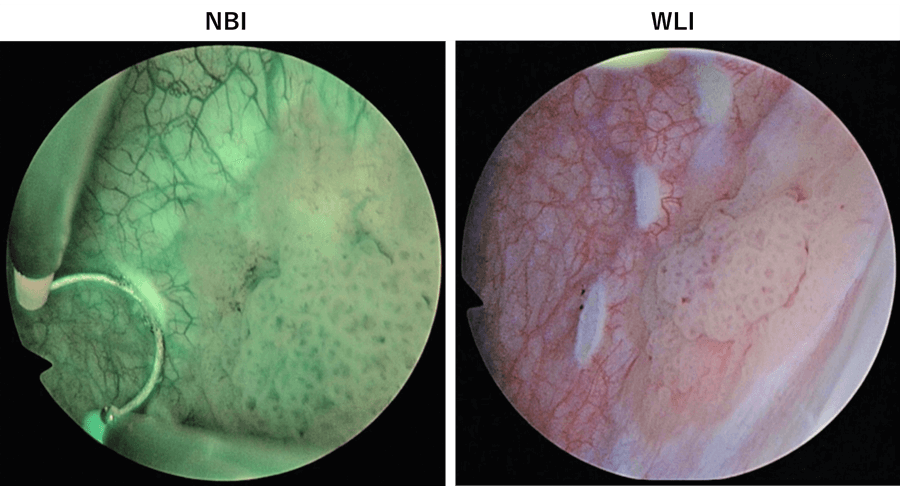 Fig. 5. Top: White area observed with NBI is the margin marked under WLI observation. It is obvious that the papillary tumor extends outside the marked area. Bottom: Marking the edge of the tumor for the abnormal lesion identified with NBI. The area looks wider than the actual tumor when seen with WLI.

Scene3. Countermeasures against poor field of view under NBI

Bleeding, residual urine, and equipment trouble are factors that may require attention when using NBI.

1.Bleeding
When there is a bleeding, the whole field of view becomes colored and unclear because NBI light bands are easily absorbed by hemoglobin (Fig. 6). Therefore, special attention is required during insertion of the cystoscope to avoid bleeding due to manipulation.

2.Residual urine
When urine is left in a bladder, the field of view sometimes becomes yellow under conventional WLI, but it also has a significant effect on NBI observation (Fig 7). It is recommended that the urine be aspirated and replaced with saline if residual urine is apparent.

3.Equipment trouble
Reduced brightness is one of the common equipment problems that can occur. It may be due to age-related deterioration of the light-guide cable or telescope. Because equipment deteriorates over time, to avoid poor field of view during an operation, it is important to perform daily maintenance on the equipment. 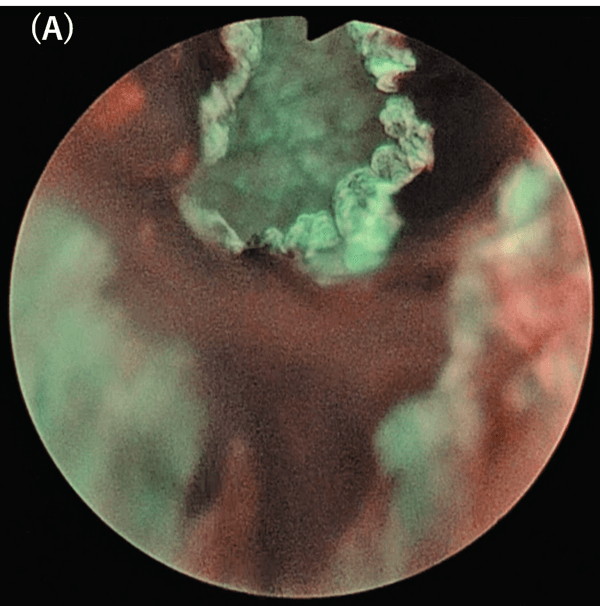 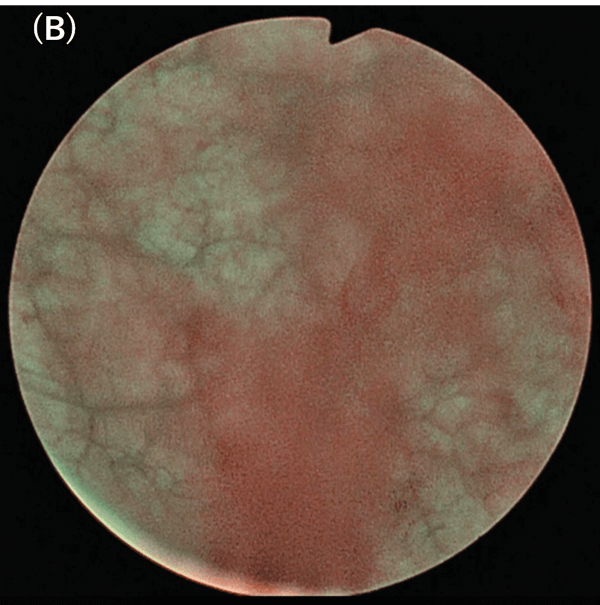 Fig. 6. NBI observations. (B) Inside the bladder. Bleeding makes the field of view dark and unclear. Fig. 7. NBI observation. Entire field of view becomes reddish due to urine, making it difficult to identify any abnormal lesions from a distance. In such cases, it is advisable to inspect the area without residual urine.

Observation using NBI reportedly detects more bladder tumors than conventional WLI cystoscopy3). To utilize this characteristic effectively in the clinical setting, it is suggested that NBI be used as much as possible. By gaining experience inspecting normal lesions, it becomes possible to identify abnormal lesions quickly and accurately. Because NBI application does not require a special drug or additional equipment other than the cystoscope, there is almost no burden for the patient. Considering the benefit of identifying abnormal lesions and having the chance to reduce bladder cancer recurrences and reoperations, NBI should be performed more actively during evaluations and treatment in the urological field.

CAUTION: Educational materials on this site are country and/or region specific. You should only view the materials for the country or region in which you are located. If you select a foreign location, the materials may discuss off-label and/or investigational use of products which are not yet approved in your country or region. Use of products outside of approved labeling is considered experimental and may be prohibited.